A few weeks ago I wrote a post on my personal Facebook about the most recent sleep paralysis episode I had during a 2 hour oil massage in Hua Hin, Thailand. A number of people commented that they’ve also had sleep paralysis happen to them before with the intensity ranging from paralysis to extreme hallucinations such as seeing demons or scary monsters in the corner of the room. 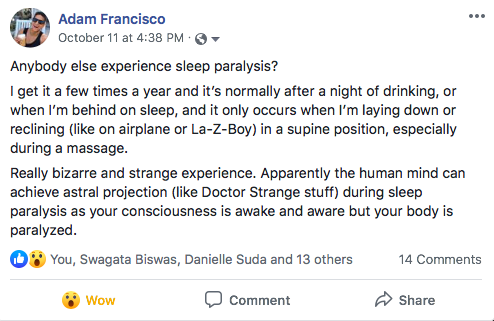 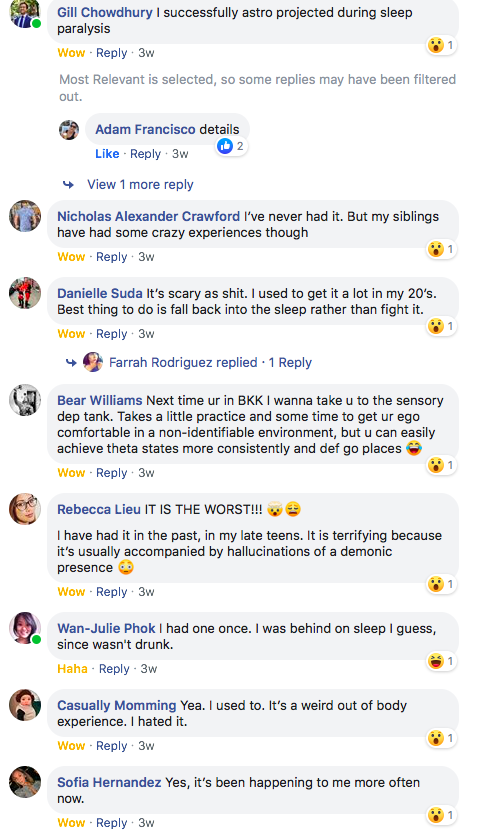 What is sleep paralysis?

Sleep paralysis is a temporary inability to move or speak that occurs when you’re waking up or falling asleep. It’s not harmful and should pass in a few seconds or minutes, but can be very frightening.

One reason why sleep paralysis might occur is so that the body doesn’t act out any of the activities that are happening in our dreams. Paralysis of the body during REM sleep therefore acts as self-protective mechanism. Who has dreamed that they jumped or fell in their dreams only to wake up and actually “jump” in bed?

June 2001 – my prom took place at Tavern on the Green in Central Park, New York City. My group of friends were all “good kids” so we didn’t sneak any drugs or alcohol in. It was good, clean fun which worked for me because I lived a pretty sheltered life in high school. One of my best friends back then had a very successful father (an international president of the fastest growing global entertainment property) so it was no surprise when he offered up his 4-bedroom, 2-floor luxury apartment in Manhattan as the afterparty spot. That’s where the good kids were gonna go to get lit.

I vividly remember sitting on his couch with a carton of orange juice, a bottle of Absolut vodka and a red solo cup in my hand. I was very paranoid about drinking too much alcohol so I only had one or two drinks – light on the vodka, heavy on the OJ. Despite pouring myself weak drinks, I passed out on his couch unable to handle the small amount of vodka that flowed through my virgin body.

The next morning I woke up … kind of.

I recall opening my eyes and looking around the room being unable to move my body. Immediately, I was overcome with extreme panic. I could feel my heart racing and I could sense that I was breathing, but I had absolutely no control over my own body. Paralyzed, I lay there in a silent room being able to see but being unable to move and not knowing what the fuck was happening. I thought to myself “looks like my mom was right about alcohol .” Thinking about how disappointed my mom was going to be that I drank myself to paralysis, I wanted to scream and cry but my body wouldn’t respond. I tried to call out for help but words could not form. My voice was voiceless. I laid there, motionless, imprisoned in my own body, feeling like a 1,000 pound weight was sitting on my chest, uselessly using all of my willpower and focus to move something – a finger, a toe, a hand, my tongue. In a desperate attempt to break free of this paralysis spell, I tried to wiggle my fingers and toes as fast as I could until they started to slowly react. These small movements created a cascading wave of hope until I was finally able to snap out of it and regain full control over my body. I sprang up out of bed, my heart racing, my face soaked in sweat.

We take the movement of our bodies for granted so it’s extremely jarring when our basic motor skills and ability to command our bodies are taken away from us. What makes the experience even weirder is that I’m sometimes unsure what’s real and what’s not. Am I dreaming? Am I awake? A sleep paralysis episode feels like a dream and reality at the same time.

Back then we didn’t have iPhones in our pockets so there was no way for me to immediately figure out what the fuck happened to me. It was such a frightening experience I decided it was best to blame it on the a a a a a alcohol and move on (sorry – I had to).

It wasn’t until years later did I experience sleep paralysis again. This time however, there was some familiarity to it. However, the sheer terror during the onset of an episode never seems to go away. Any time your body is paralyzed is going to scare the shit out of you.

Since my first episode in 2001 at 17 years old, I’ve probably had two dozen or so sleep paralysis episodes ranging from couches, airplanes, cars and massage tables. Usually I am able to snap out of them relatively quickly. But on a few occasions my body is so physically exhausted that I’ll fall back asleep and then immediately into another episode. Sometimes it feels like I am having half a dozen mini-episodes in a row before I am finally able to break free of the spell. No matter how many times they happen, the panic and terror are always there. 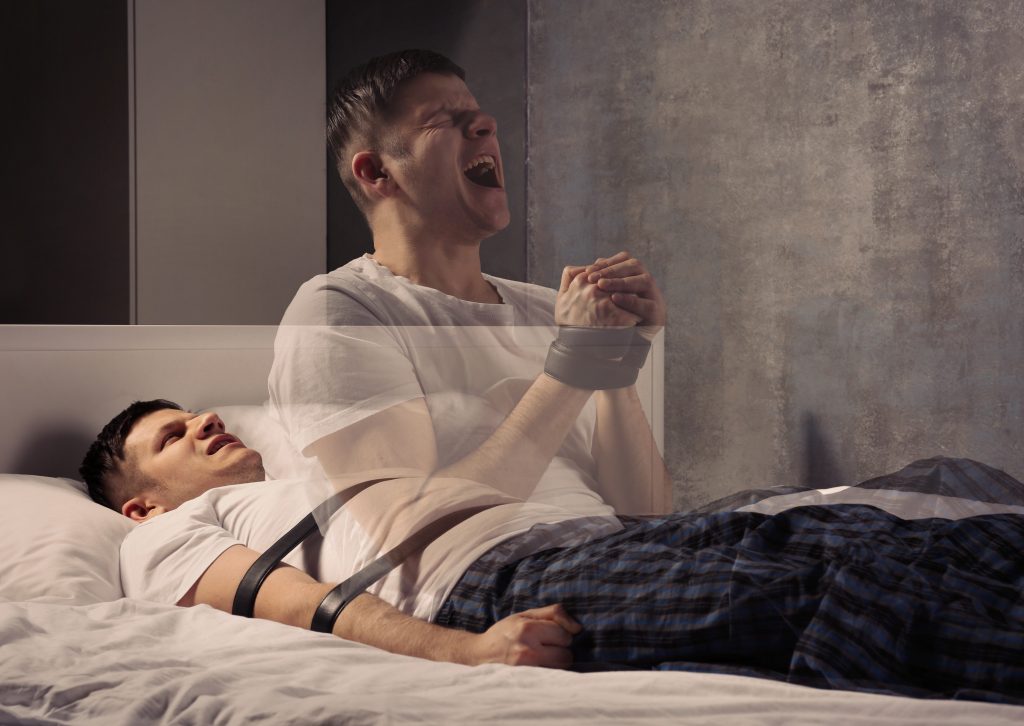 During the most recent incident mentioned earlier, I was laying on a massage table in Hua Hin on my back and I “woke up” to the therapist massaging my legs. I could feel every massage stroke, hear the spa music playing and feel my dogs pressed against my sides. But I was not able to move or speak. It’s a weird sensation being completely aware of your surroundings but being unable to respond or react to them. I was able to move my toes and fingers first, before slowly regaining control over the rest of my body.

There are a few consistent conditions that I started noticing about when my sleep paralysis episodes occur:

Another thing to consider is that I was diagnosed with hypertension at 25 years old. I’ve been able to manage it through a series of lifestyle changes, nutrition, exercise and medication. However, it’s possible that I am more prone to sleep paralysis given my medical condition. According to MedicalNewsToday,

Sleep paralysis can be a symptom of medical problems such as … hypertension, and anxiety disorders.

Because of my experience with sleep paralysis, being paralyzed is one of my greatest fears. I cannot imagine being permanently imprisoned in your my body until death.

So what causes sleep paralysis?

According to WebMD. these are the primary factors:

I can’t control that I have hypertension or the medication I take for it but I can aim for 7 hours of sleep a night, drink in moderation, and sleep on my side or stomach.

For those of us who’ve seen Marvel’s Doctor Strange, you already have some familiarity with astral projection. The Ancient One was able to push Stephen Strange’s astral form out of his body and into the astral plane.

The astral plane is the level beyond the physical, the realm of dreams, spirits, and psychic phenomena, the substance and vehicle for contact between the material and the mystical.

The theory is that you can separate your soul, spirit or astral form from your body during a sleep paralysis episode because your consciousness is awake while your physical form is paralyzed. This gives those wanting to explore astral projection the ideal conditions to do so. I have only tried to do this once and the experience was so terrifying that I never tried to do it again.

Back in college in 2003 during a sleep paralysis episode, I focused on trying to separate my “soul” from my body (whatever this means). A few minutes of effort into the experience, I gave up. I stood up, got out of bed and walked to the bathroom. I blinked and suddenly I was back in my bed again waking up. “That’s weird” I thought. So I got up to go to the bathroom again and made it a few steps closer until I blinked and then woke up in my bed…again. This happened five times with me seemingly getting closer and closer to the bathroom until finally I was standing in front of the urinal. It seemed that my fifth attempt to get to the bathroom worked as I was able to re-enter reality and actually use the bathroom. And that experience wrapped up my astral projection efforts forever. No thanks! 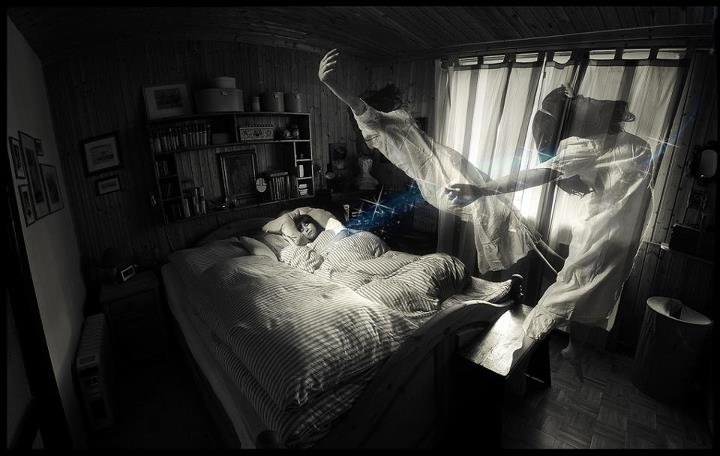 The main difference between lucid dreaming and astral projection is the onset. In a lucid dream, the conscious mind wakes after you fall asleep and the dream is on. On the other hand, astral projectors consciously get to the spiritual state

What I find most interesting, and a point that has been brought up by AstralHQ is that people who have hallucinations never seem to have positive visions. It’s always demons, monster, or other scary spiritual entities.

After all, these hallucinations don’t normally comprise of famous celebrities like Jennifer Lawrence and Chris Pratt sat on the end of your bed. Most often, they’re rather unique looking creatures – much like the entities that you’d expect to meet on the astral plane.

If you’re curious about astral projection, you can check out AstralHQ.com. I am not an expert in this field. I am just a sleep paralysis sufferer. 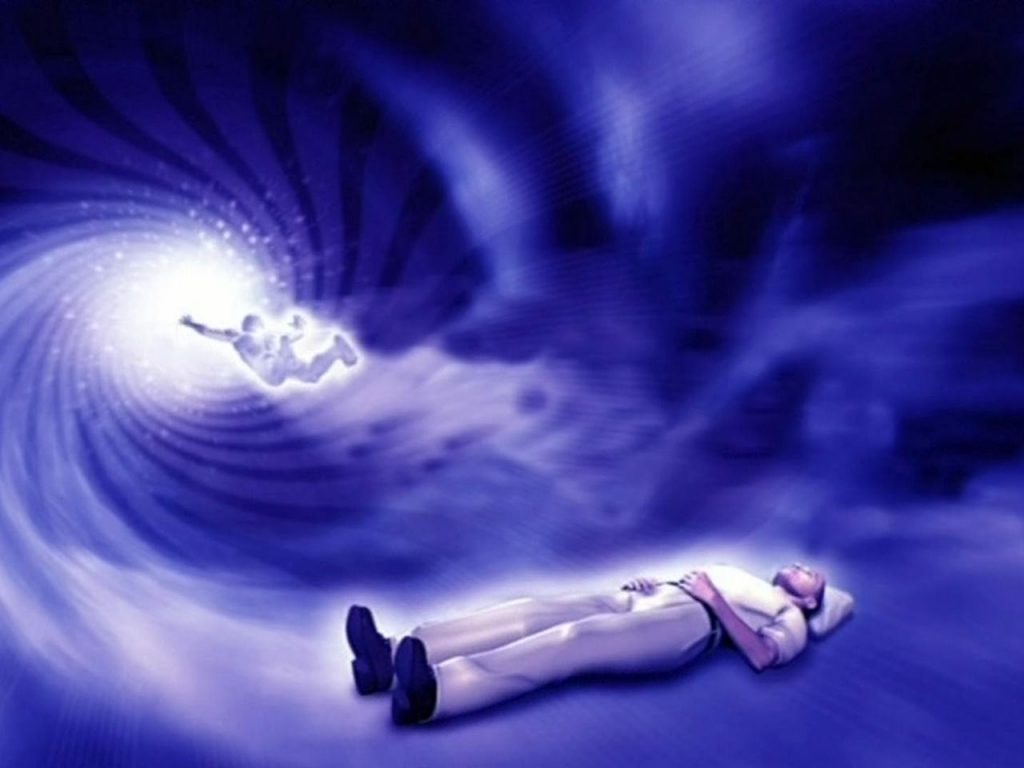 According to research, around 8% of people will experience a sleep paralysis episode at least once in their lifetime. The number increases to 32% for individuals with any sort of psychiatric disorder (possibly including hypertension).

If you haven’t one yet, hopefully this article will at least somewhat prepare you for the experience. It’s important to remember that sleep paralysis episodes themselves are not dangerous, they are not harmful, and they do not require treatment. However, the best way to avoid them is to get enough sleep, keeping alcohol consumption and drug use to a minimum, and sleeping on your side or stomach.

Do you suffer from sleep paralysis? Have you experienced astral projection before? 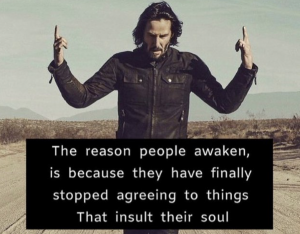 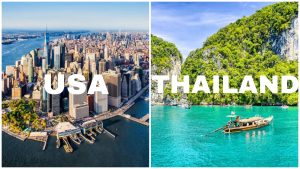 What Americans Stop and Start Doing Once They’re In Thailand 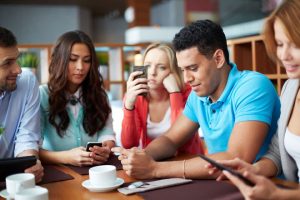 The Rudest Habit In The World