Hey everyone! Hope you’re all having lovely weeks. I received a DM this week on Instagram from a loyal BeFreeMySheeple.com reader about a controlling and abusive boyfriend. Here are “10 Signs Of A Controlling Boyfriend” from WomensHealthMag.com to help you identify red flags.

Hey! I’m in a relationship right now that I don’t feel like being in. He’s controlling and emotionally abusive. I want to do my own thing, venture out. I like flirting too, I like not having this commitment to this person who on one hand doesn’t even treat me right. He’s already talking about having our own family (it’s only been two months!!) and that I wouldn’t be allowed to visit my actual family back home in Bangkok. I should break up with him. How do I find the heart to do it and not go back to him? He lives two floors above me, by the way. 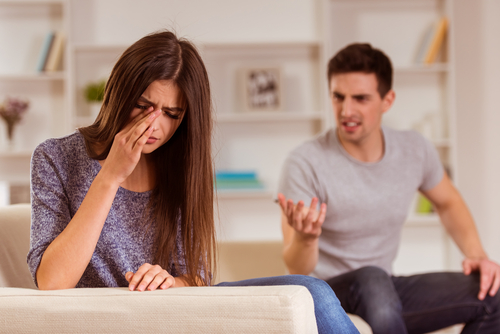 You know the expression you don’t shit where you eat? You already did that. Really the best option at this point is for you to quickly find a new place to live as living next to an abusive ex is going to create a toxic situation for you. If he’s abusive when you’re with him, how will he behave when you break up with him? And what happens when he sees other men around you?

That’s exactly what I was thinking! He’s threatened me once actually. I’m dumb enough that I thought I’d still make it work after he apologized. Plus I have a year lease, can’t move. It’s definitely a tough situation.

Once you find a new place to live, quickly move into that new place and then break up with him. The key is for him to not see this coming and also have no idea where you’re living. CUT HIM OFF cold after that. Text is probably best. Maybe give him feedback over text so he hopefully improves himself: “you’re abusive and controlling so I’m out.”

I would explain to your landlord what the exact situation is. If your boyfriend has threatened you, you can file a police report and use that with your landlord.

Oh yeah I forgot. It’s Canada. They actually care about these things!

One of the benefits of living in a developed country is that they care about women’s rights and equality so I would do that. No situation is set in stone. You have the power to restore your glory!!!

That’s what I’m trying at this point. When I’m away from him, that’s the most motivated I’ve been. I feel like for a lot of us we’re so scared to not have someone that we rather be disrespected than be alone, y’know?

That’s exactly it. A majority of people accept and become complacent with mediocrity as the trade-off for having someone there. To these people I say … get dogs!!!

That’s what I mean! My dog is back home in Thailand with my friends. I’d kill for my own puppy to come back home to!

People do not own each other. We are not each other’s property. People should be able to do with their own bodies what they want to and that includes having sex, friendships or relationships with other people. True love is giving someone the freedom to be and do whatever they want to. It’s not controlling or bringing down or de-motivating. Stay woke!

I never expected this to come with being monogamous honestly. He doesn’t want me to be friends with certain people, with any males, he doesn’t want me to visit my family for a week either. I thought they were supposed to lift you up or whatever the Disney movies told me growing up.

Disney movies lied. Happily ever after is extremely rare in a traditional monogamous relationship. The only happily ever after we can really have is when we become self-partnered, meaning being happy with ourselves. Nobody can date you better than you can.

See even after talking to you, I’m still slightly skeptical that it doesn’t exist. But I realize that most of the relationships that have lasted long only exist among boomers and not our current generation. I like being a free woman, actually makes me want to get all pretty when I go out instead of dressing like a hobo just because my boyfriend thinks I’m pretty either way. I’m still affected by society. Being non-monogamous is such a new concept to me, I didn’t know it was possible!

It’s extremely possible and it’s a growing movement. What’s funny about monogamy is that it used to mean one partner for life …  now it means one partner at a time. And even still, how many monogamous people cheat thereby negating their monogamy? How many monogamous people are sexually repressed and therefore resent monogamy and then their partner?

Wow really? I honestly couldn’t even imagine getting married to anyone. I can’t understanding being in the same room with a guy I just did the nasties with for more than 20 minutes. Then I’m all like “get out! I need my me time!”

I would argue a majority of people fall into these categories simply because even the best sex becomes routine eventually. That’s the surface level. Add in the responsibilities of a relationship, the financial commitments, other family members interfering and you can quickly see why escaping to another person or fantasizing to escape becomes an option.

I have a high libido. I cheated on my current partner. Being someone who’s been so against infidelity and yet still cheated on him made me realize that I was forcing myself instead of going with the flow. He doesn’t enjoy pleasuring me as a woman either. I mean, I’m still waiting to be put on my pedestal.

You need a person who will accept you and unlock you and not limit you. Unfortunately monogamy is very limiting for many people. Some people love monogamy and thrive in it – in the short term. I believe nobody should put anyone on a pedestal other than themselves. Which ties back to loving yourself and dating yourself.

So to recap, here are the steps to get out of an abusive relationship :

1) Explain to your landlord what the situation is. If this doesn’t work, file a police report.

4) Upon being safely away, text him that it’s over because he’s abusive and controlling and block all forms of contact.

6) Live happily ever after.

Have you been in an emotionally abusive relationship before? How did you get out of it?

And for those of you curious about the science of cheating, check out this amazing article from Business Insider.

Do you need advice? Leave a comment or you can e-mail me adam@befreemysheeple.com. If you enjoyed reading/watching this, you can follow me on Instagram, @adamfrancisco & @befreemysheeple.